The Relevance of Chronic Inflammation for Genomic Instability in Cancers

Chronic inflammation and genomic instability are hallmarks of cancers.

Anti-inflammatory or anti-oxidant therapies might be beneficial for amelioratingthe risk of DNA damage and cancer progression.

Chronic inflammation is a characteristic of most cancers and has been implicated as a driving force for cancer development and progression. Indeed, the link between chronic inflammation and cancer was first proposed by Rudolf Virchow over a century ago, when he noticed the presence of inflammatory cells in neoplastic tissues.1, 2 Among hematological malignancies, myeloproliferative neoplasms (MPNs), clonal disorders of hematopoietic stem cells (HSCs), have been described as „inflammatory diseases“ and „human inflammation model for cancer development“ reflecting chronic inflammation to be a major driving force for disease initiation and progression.1, 3 Infection, injury, age-associated changes or genetic aberrations can drive elevated production of inflammatory cytokines and chemokines from hematopoietic and non-hematopoietic cells. Innate immune cells including macrophages, dendritic cells, myeloid derived suppressor cells, natural killer cells (NK), and neutrophils are the major cell types producing various pro-inflammatory cytokines and chemokines (such as IL-1β, TNF-α, IL-6, and IL-8) in response to various host reactions. A finely-tuned orchestration of inflam-matory stimuli is important for normal blood cell production and proper immune cell functions during homeostasis, infections and injury, while persistent chronic inflammation that exceeds physiological levels can be tumorigenic. Defects in resolving an active inflammatory state or persistent infections can lead to the development of chronic inflammation4–6.

How does inflammation trigger genomic instability?

The causative and consequent relationships between chronic inflammation and genetic instability is a matter of intense investigation in cancer research.
An enabling characteristic for the acquisition of genetic instability is the activity of cytokines in chronic inflammatory conditions. Cytokines by virtue of their growth factor activity mediate intracellular communication. Therefore, when present in excess for a prolonged time, inflammatory cytokines can induce enhanced growth signaling. These constitutively active growth mechanisms may promote error prone DNA replication stress favoring the formation of DNA double strand breaks (DSBs). Consequently, the genetic regions harboring DSBs may provide a fertile ground for the acquisition of additional mutations or gene rearrangements with further evolutionary advantages9.

In addition, several inflammatory cytokines induce the formation of reactive oxygen species (ROS) through augmented induction of mitochondrial metabolic activity and via the activation of NADP(H) oxidase, and reactive nitrogen species (RNS) via the activation of inducible nitric oxide synthase (iNOS)9. Excessive ROS and RNS radical production leads to oxidative or nitrative stress, which in turn may cause damage of biomolecules such as DNA either directly or indirectly. Direct effects involve DNA cross-links, single-or double-strand breaks, and oxidative DNA damage. For example, ROS generate 8-hydroxydG (8-OHdG), a marker of oxidative DNA damage, leading to a G → T transversion, has been implicated in cancers. Overproduction of nitric oxide (NO) by inflammatory mediators triggers the generation of RNS and highly reactive peroxynitrite anion (ONOO−) leading to the formation of 8-nitroguanine, which can create DNA fragmentation10. Defects in resolving chronic inflammation and/or error prone DNA repair mechanisms can lead to the emergence of a mutant cell, which is either cleared by successful immunosurveillance mechanisms or persists. While the majority of random mutations does not affect the fitness of the cell, certain mutations can impart a selective advantage leading to the outgrowth of mutant cells11.

Increased inflammation and decreased genome integrity during aging represents a valid scenario that links the association between chronic inflammation and genomic instability in humans. In support of this, recent studies of whole-exome sequencing of several thousands of individuals unselected for hematological phenotypes demonstrated a progressive increase in the number of somatic driver mutations with age11–13. Intriguingly, most of the mutations that are present in aging humans are leukemia related and recurrently affect the same set of genes. These mutations occurred primarily in genes that are commonly mutated in myeloid cancers, such as DNMT3A, TET2, ASXL1, and JAK2, many of which play a role in regulating cytokine signaling. Currently, it remains enigmatic why certain gene loci are more susceptible for mutations than others.

Although a rare event, acquisition of somatic driver mutations in HSCs can impart a selective advantage to the mutant stem cell leading to the establishment of clonal sub-populations (< 2 %) in the blood of affected individuals. At this stage many of these individuals do not show signs of hematological malignancies, a phenomenon known as „clonal hematopoiesis of indeterminate potential“ (CHIP)14. Therefore, CHIP might represent a pre-malignant state (Fig.). Individuals with CHIP have an approximately tenfold increased risk of developing hematological cancer in the future, with an estimated risk of transformation of about 1% per year11–13. Interestingly, the majority of individuals with CHIP mutations also displayed increased risk of cardiovascular complications, linking CHIP mutations to inflammation and cancer11. 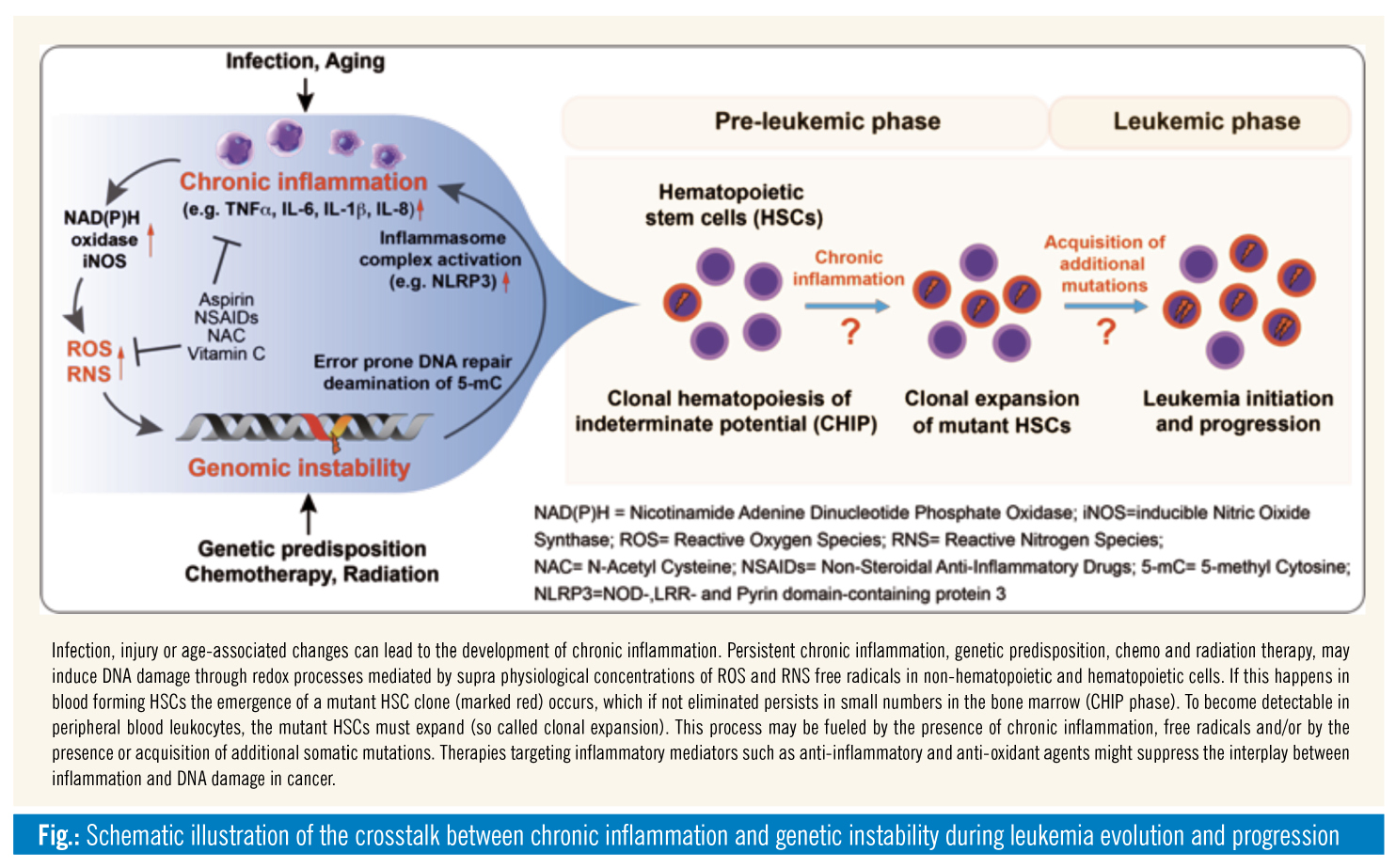 Crosstalk between chronic inflammation and genetic instability during cancer evolution and progression: The presence of CHIP-mutation can affect directly inflammatory pathway activities and accelerate the mutant clone cell division. Damage in genomic and mitochondrial DNA can activate inflammasome complex, which leads to further elevation of inflammatory mediators. The inflammatory microenvironment that is present around the mutant clone can lead to additional production of free radicals, which in turn favors acquisition of additional mutations and/or clonal expansion leading to the appearance of mutant clone products in the circulation. As a result of CHIP mutation, increased operation of inflammatory pathways in mutated cells feed-forwards inflammation and genetic instability leading to cancer evolution and progression (Fig.). From the perspective that chronic inflammation may drive cancer evolution and progression, early treatments targeting inflammation may reduce crosstalk between chronic inflammation and genetic instability and induce a state of minimal disease in patients.

Persistent chronic inflammation that exceeds physiological levels can be tumorigenic, in part, directly through reactive oxygen and nitrogen species mediated induction of genetic lesions and genomic instability or indirectly by enabling immunosurveillance escape mechanisms. In cancers, the causative and consequent relationships between chronic inflammation and genetic instability is a seed-and-soil question, which is context and disease stage-dependent. Resolution of chronic inflammation and redox state through targeting inflammatory mediators or anti-oxidant supplementation might be beneficial to mitigate effects of inflammation and genomic damage in cancer. Further studies are needed to identify the relative contributions of individual inflammatory factors that mediate genomic instability and facilitate mutated stem cells to reach a critical clone size. The essence of these efforts will undoubtfully inform an armamentarium of therapies that can prevent minor mutant clones to progress into a chronic or acute leukemia. 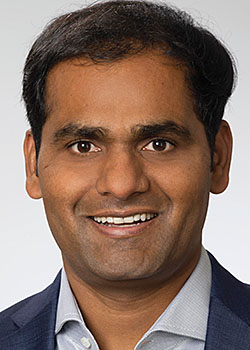 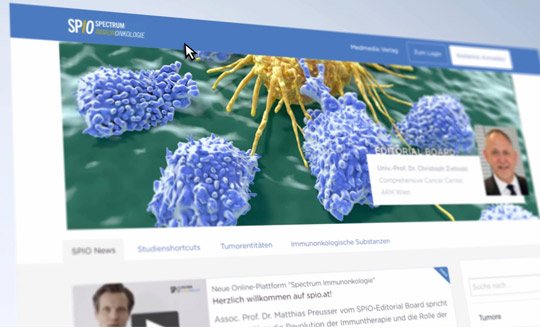